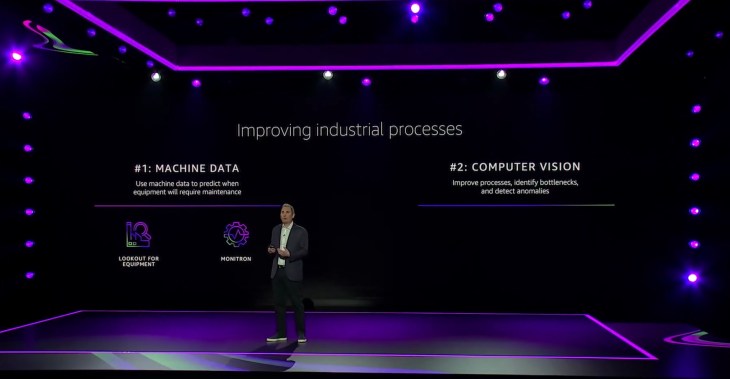 One of the areas that is often left behind when it comes to cloud computing is the industrial sector. That’s because these facilities often have older equipment or proprietary systems that aren’t well suited to the cloud. Amazon wants to change that, and today the company announced a slew of new services at AWS re:Invent aimed at helping the industrial sector understand their equipment and environments better.

For starters, the company announced Amazon Monitron, which is designed to monitor equipment and send signals to the engineering team when the equipment could be breaking down. If industrial companies can know when their equipment is breaking, it allows them to repair on it their own terms, rather than waiting until after it breaks down and having the equipment down at what could be an inopportune time.

As AWS CEO Andy Jassy says, an experienced engineer will know when equipment is breaking down by a certain change in sound or a vibration, but if the machine could tell you even before it got that far, it would be a huge boost to these teams.

“…a lot of companies either don’t have sensors, they’re not modern powerful sensors, or they are not consistent and they don’t know how to take that data from the sensors and send it to the cloud, and they don’t know how to build machine learning models, and our manufacturing companies we work with are asking [us] just solve this [and] build an end-to-end solution. So I’m excited to announce today the launch of Amazon Monotron, which is an end-to-end solution for equipment monitoring,” Jassy said.

The company builds a machine learning model that understands what a normal state looks like, then uses that information to find anomalies and send back information to the team in a mobile app about equipment that needs maintenance now based on the data the model is seeing.

For those companies who may have a more modern system and don’t need the complete package that Monotron offers, Amazon has something for these customers as well. If you have modern sensors, but you don’t have a sophisticated machine learning model, Amazon can ingest this data and apply its machine learning algorithms to find anomalies just as it can with Monotron.

“So we have something for this group of customers as well to announce today, which is the launch of Amazon Lookout for Equipment, which does anomaly detection for industrial machinery,” he said.

In addition, the company announced the Panorama Appliance for companies using cameras at the edge who want to use more sophisticated computer vision, but might not have the most modern equipment to do that. “I’m excited to announce today the launch of the AWS Panorama Appliance which is a new hardware appliance [that allows] organizations to add computer vision to existing on premises smart cameras,” Jassy told AWS re:Invent today.

In addition, it also announced a Panorama SDK to help hardware vendors build smarter cameras based on Panorama.

All of these services are designed to give industrial companies access to sophisticated cloud and machine learning technology at whatever level they may require depending on where they are on the technology journey.