A few weeks back, The Exchange looked into the pace of edtech exits, noting that over time, the sector has delivered rising exit volume. All startup verticals want to demonstrate a history of liquidity, so you might imagine that even before the COVID-19 pandemic, edtech fundraising was rising due to its improving exit profile.

The Exchange explores startups, markets and money. You can read it every morning on Extra Crunch, or get The Exchange newsletter every Saturday.

However, with COVID-19 pushing more students to learn from home and forcing schools to invest in new tooling and other digital capabilities that support remote-learning, a strengthening exit market and a market shift towards edtech services has led to an explosion in venture capital investment in the sector.

According to CBInsight’s data concerning the state of edtech venture capital activity, startups in the sector have already surpassed their 2019 venture capital dollar tally and are on-track to set a new record in 2020, besting even 2018’s elevated result. Whether more total edtech deals will be closed in 2020 is less clear, but if current pace holds, 2020 should come somewhat close to 2018’s edtech deal count. 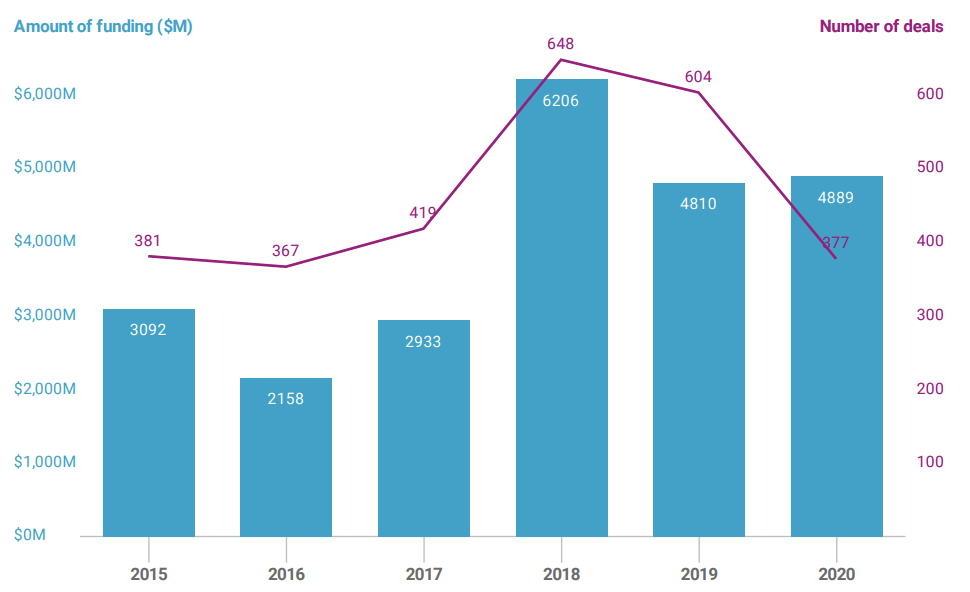 Driving 2020’s huge VC totals in terms of dollars invested are a grip of mega-rounds — venture deals of $100 million or more. According to CBInsights data, 13 deals of $100 million or more have been raised by edtech startups thus far in 2020, worth billions of dollars as a group. Indeed, the huge rounds from Yuandudao and Zuoyebang were worth $1.75 billion as a pair.

But don’t think that it is all over for early-stage edtech rounds. Per the same dataset, a historically-normal 50% of edtech deals recorded through August of 2020 were seed or angel investments. These transactions are worth a far-smaller fraction of dollars-raised by definition, but the number of very early bets into the edtech space implies that there is still lots of room to build. We’ve covered a number of early-stage financings such as Edsight’s $1.6 million round and Learn In’s $3.5 million round. Gaps around inclusivity, efficacy, outcomes and back-end support still remain and are ripe territory for new startups to innovate within. Plus, data shows that there’s a good pipeline of future deals for the later-stage investors that have already demonstrated an interest in writing big edtech checks.

The CBInsights data also shows that 8 of the 10 top-funded edtech startups are in China, and a chunk of those are focused on English-learning education. China’s edtech scene has historically been bigger than other regions because of a high population, consumer spending patterns and a cultural focus on education. It was growing much before the pandemic; when venture investing dropped in China Q1 2019, edtech grew year over year and brought in $1.86 billion.

In the past couple of months, edtech startups have closed strategic capital to expand into the gold mine that is China. Labster, for example, recently brought on $9 million in capital and GGV’s Jenny Lee, who is based in Shanghai, to break into China. Duolingo similarly took a $10 million check to welcome on an investor with knowledge of Asian markets, General Atlantic.

Byju’s, coming out of India, is one of the other top-funded edtech startups. The personalized learning startup, already the most valued edtech startup in the world, got a $500 million check from Silver Lake earlier this week. It has doubled its revenue during the pandemic as it added more than 20 million new students to its platform. The company also acquired 18-month old White Hat Jr for $300 million. And the venture capital firm that invested in both Byju’s and White Hat Jr? Owl Ventures, which has raised a $565 million pair of funds to invest in edtech.

The unicorn’s growth during the pandemic is hard to get your head around (although we tried to) but sums up how boggling growth can be.

That growth is part of why edtech’s venture capital results are as strong as they are. Now the challenge for the sector will be keeping its growth alive in 2021, showing investors that their 2020 bets were not merely wagers made during a single, overheated year, but bets placed in a startup niche that will keep getting hotter for years to come.