There’s no frontrunner to be found among the TikTok alternatives

The U.S. market has no real frontrunner poised to claim TikTok’s throne if the app is banned in the country. According to Trump’s executive order, TikTok’s owner ByteDance has to divest of TikTok’s U.S. operations or the app will be banned from the U.S. market on November 12. A number of companies have considered the TikTok deal, including front-runner Microsoft, Twitter, Google, and even Oracle, for some reason. But if a deal doesn’t get done, it’s unclear what app — if any — will be able to take TikTok’s place.

Instagram, of course, is clearly vying for TikTok users with the launch of its latest short-form video feature called “Reels.” But the addition has so far seen mixed reviews. Though it’s still early days for Reels, The New York Times rushed to call it a “dud” on arrival. Engadget, meanwhile, said the feature was actually a “worthy rival,” but it gets lost in Instagram’s bloat. Instagram also is not a direct TikTok clone. It’s become an all-purpose social network for photo-sharing, viewing Stories, online shopping, live video content, long-form video (IGTV), private messaging, and more.

It’s unclear if TikTok users will truly consider Instagram an alternative in the event that TikTok disappears.

There are a number of other apps that are more direct competitors to TikTok, as they also employ a similar vertical video feed format, focus on short-form video, and offer a combination of editing tools and music that made TikTok so popular. The lineup today includes Likee, Byte, Triller, Dubsmash, and Zynn, among other smaller players. But among these apps, each with their own strengths and weaknesses, there’s no clear leader.

According to data provided by app store intelligence firm App Annie, Singapore-based Likee had the largest number of weekly active users in the U.S. for the week ending August 8. (For context, Trump’s executive order was signed on August 6.)

Likee is very much a TikTok clone, unfortunately with ripped content aplenty, no less. App Annie reports it had 1.9 million weekly active users across iPhone and Android combined in the U.S. during the week of August 2-8, 2020. Likee has also steadily grown its weekly active users numbers and hit a high of No. 71 in overall downloads on iPhone back on May 27. 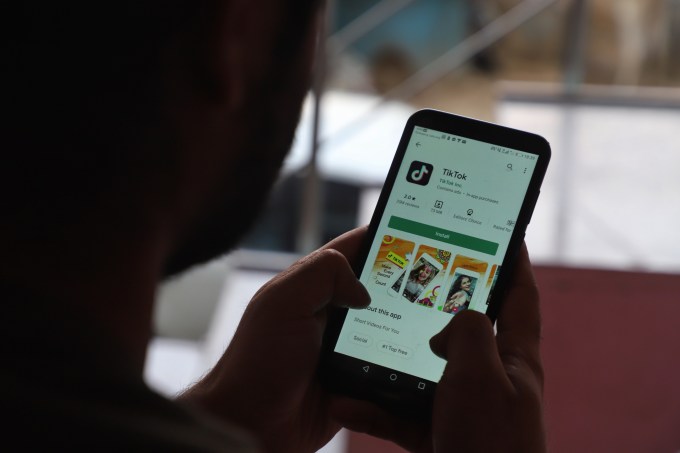 The next two largest apps were Byte and Triller with 1.1 million weekly active users apiece, during the same time period of Aug. 2-8. Both also briefly flirted with the top of the App Store charts as news of a potential ban made the headlines. This allowed Byte to reach No. 1 in overall downloads on iPhone on July 8. Triller then followed, briefly reaching No. 1 in overall downloads on iPhone on August 1.

Meanwhile, despite reports of being filled with stolen content, TikTok clone Zynn had a decent showing. The app had 600,000 weekly active users during the week ending Aug. 8. It hit No. 1 in overall downloads on iPhone on May 27, after seeing a bust of downloads and active users in late May.

However, Zynn doesn’t present a solution to the TikTok problem as it, too, is operated by a Chinese tech giant. The app was created by Owlii, owned by a billion-dollar Chinese company Kuaishou, which is the second-most popular video platform in China after Douyin (ByteDance’s name for China’s version of TikTok).

There are a number of lesser-known TikTok alternatives as well, including Lomotif, Funimate, Kwai, Firework, and others. And there are video apps that focus on some aspect of TikTok, such as the live-streaming apps like Live.Me, Twitch, and Caffeine, as well as social video chat apps like Squad, Houseparty, Murge, and others. But none of these could be considered a TikTok competitor.

Snapchat is another big name vying for TikTok’s users, but it doesn’t yet have TikTok-like features launched publicly.

TechCrunch reported in July the app was testing TikTok-style navigation. Earlier this month, Snap announced it would soon test a feature that lets users set their Snaps to music, similar to TikTok, and had music licensing deals lineup up to that effect. Given the overlap with TikTok’s Gen Z user base, Snapchat could do well here but it seems in no rush to get this feature out, unlike Instagram. The company said it would begin the test the feature later this fall.

What could happen, instead, if TikTok were to entirely disappear, would be a fracturing of its user base across a range of competitive apps.

Already, there are signs of this happening. On news of the possible TikTok ban, a community of TikTok users who call themselves “alt TikTok” — a group that includes those known for their absurdist humor as well as gay TikTok, BuzzFeed reported — stormed Byte. The brief app store chart ranking bumps seen by other apps like Triller and Dubsmash also indicate the TikTok community was hedging its bets by setting up shop on competitive apps just in case.

Of course, losing TikTok for good is a worst-case scenario. The hope for many fans of the short-form app is that the company sells the U.S. operations in order remain in this market.